Inês Lopes and Simone Lopes were the winners of the first edition of the Prémios Tripla. The animation, “Time out of time”, was the chosen project by the jury to win the categories of ≤ 30 seconds and First Award. 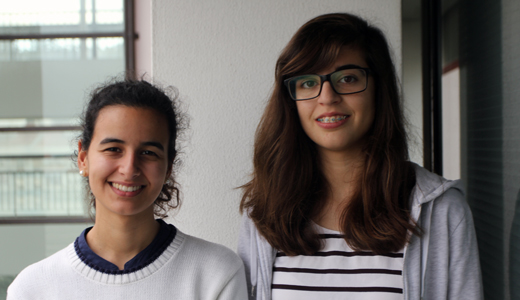 The students from the 2nd year of Audiovisual and Multimedia undergraduate course were the winners of the first edition of Prémios Tripla. This initiative is a partnership between ESCS and EDP Foundation and aimed to distinguish the best works made by students of the School under the theme “Volunteering”. When they became aware of the competition, the students thought to participate in and soon the first ideas arose. “We assumed that the work would be a 2D animation,” said the students. Simone got the illustration part and Inês worked on the animation part. With Simone in Torres Vedras and Inês in Lisbon, all the work was done online, via social networks (Facebook) and e-mail.

A matter of time

Although coincide with a time of exams and work deliveries, the two students met one morning for a little brainstorming. The result of that meeting was a storyboard and a task schedule. During the creative process, the students discussed among themselves what meaning of volunteering they wanted to perform in their work. The initial idea was to have an agenda, where by the end of each week would be scheduled a visit to an elderly lady, named Mrs Alice. But for some reason, the weeks passed and the visits were postponed. “We think, in general, people do not have time for volunteering. At the end of the video, when Mrs Alice disappears, we knew we were going to cause some sort of emotion in the audience”, said Inês.”People are thinking they could stop doing some superfluous things in their day-to-day and devote a little time to volunteering”, said Simone who was responsible for characters and their expressions illustration. “It was very close to the image we wanted to transmit. We tried to draw an old lady, alone, waiting on a park bench. The idea of Mrs Alice was born, unconsciously, as we thought in our grandparents”, commented the students.

The hardest part, according to the students, was to implement the whole project in the stipulated time. Simone, after a few sketches on paper, tried to pass them to the Adobe Illustrator. “Once transformed in vectorial and exported to Flash, we joined the other elements that we had created in Illustrator”, Simone said. “We gave up some ideas, because in 30 seconds everything was very quick and imperceptible. Make the page turn was one of the biggest challenges of this project”, said Inês who was responsible for making the animation in Adobe Flash. “After synchronizing the music with the animation, we converted to mpeg 4 (Full HD) with Adobe Premiere application”, said Inês. The first contact that the students had with this type of multimedia tools was in ESCS. “We had introduction to Flash, in Communication Instruments subject”. In the second semester, we made a project where we had to make motion typography, in Communication Design subject”. It was in those two subjects from the Audiovisual and Multimedia first year undergraduate course that the students have acquired the necessary skills to perform the multimedia project “Tempo sem tempo.” Inês and Simone have worked together on various projects since their first year in ESCS. “We have a unique methodology, we know what each other likes to do and know. The problem was the little time to run the project and distance, but everything went well, “reveal the students, proud of having won the First Award. “We knew that our film had a very strong message, but we were surprised with the win”, they confess.